The machines under factory race team tents at Supercross are truly admirable pieces, and Jason Anderson's Husqvarna Rockstar Edition FC 450 is no exception. Rekluse got a behind-the-scenes look at what goes into a Supercross Champion's bike.

Back in 2017, Jason Anderson made it clear to Husqvarna that he wanted the same opportunities to race on the latest and greatest machinery as his counterparts at the Red Bull KTM team. Thanks to KTM’s Factory Edition bike program that met the AMA’s homologation requirements, the factory Red Bull KTM race team was able to compete aboard what were essentially the next year’s machines, one season early.

Anderson’s requests were met, and in 2018 the Rockstar Edition FC 450 was launched. “I felt that I was at a competitive disadvantage when I first moved up to the 450 class on the 2017 FC 450 because the guys on the KTM team had their Factory Edition bikes,” said Anderson. “Basically, I was racing against them on a bike that was one generation older.”

Anderson’s wishes did not fall on deaf ears, and in 2018 Husqvarna announced the 2018.5 Rockstar Edition FC 450, which boasted an all-new chassis and bodywork, based off of the same starting platform as the KTM 450 SX-F Factory Edition bike.

Anderson obviously gelled with the bike quite well after some initial growing pains, and as you all well know, El Hombre went on to win the 2018 Monster Energy Supercross Championship aboard the new machine.

As the Factory Edition KTM has been since its introduction, the Rockstar Edition Husky was an accurate preview of what was to come in the following year’s production model. The “standard” 2019 Husqvarna FC 450 received all of the updates and upgrades made on the Rockstar Edition from the season prior, and this is what Anderson’s 2019 race bike is based upon.

Sadly, Anderson suffered a badly broken arm and some internal injuries only a handful of races into the 2019 season in a mid-week testing crash and will miss the remainder of the series. This, however, has left his race bike idle and we pounced on the opportunity to take a closer look at the machine.

Surprisingly, Anderson’s bike is more standard than one might assume. Between the AMA’s production rule and the excellent performance of the machine in stock form, Anderson doesn’t need much to feel comfortable and competitive on his bike. “There are, of course, special suspension components and little modifications made to the bike to make it suitable for Supercross racing, but there’s nothing really too exotic like you might think,” said Anderson’s mechanic Chris “C-Lo” Loredo, “Jason is very concerned with the overall balance of the bike. He likes his fork to be softer than most racers, because that helps him with front-end traction. It’s a constant search to find the perfect balance of stiffness and control without losing traction.”

At the front of Anderson’s machine is a set of massive 52 mm WP Cone Valve forks. Out back, it is matched by a WP Trax shock, which features a check valve of sorts that allows the rear end to move more freely for a plush ride in acceleration chop. We’re told by team insiders, however, that for Supercross applications this feature is often disabled as it can adversely affect performance in Supercross whoops.

Anderson is pretty easy to satisfy when it comes to his bike set up. “I just want it to be easy to ride,” he said. “I like the bike to be really linear. Obviously, you need a lot of power on tap when you need to clear a big jump out of a corner, but I like my bike to deliver power smoothly with no big hits that waste energy.”

“Exactly,” adds Loredo. “Jason’s bike has a very linear power delivery. We’re always looking for the power for the big jumps but delivery to ride the bike efficiently through the entire race, it needs to be easy to control. The engine pulls far up top, but also has a lot of controllable torque down low for efficient traction.”

The in-house Factory Services engine department handles the build of Anderson’s engine, along with every other racer on the Rockstar Energy Husqvarna, Red Bull KTM and Troy Lee Designs/red Bull/KTM squads.

One of the keys to fine tuning the power delivery for Anderson is the Rekluse Core Manual clutch system, which improves the delivery of oil to the clutch plates and helps decrease operating temperatures. If you’ve ever watched Anderson’s riding style closely, you know that he likes to ride his bikes in the meat of the powerband and is rarely screaming it at a high RPM. Though he may not be slipping the clutch as aggressively, he is putting an extra load on the components by riding the bike in a taller gear. The Core Manual system ensures both reliability and durability.

One modification made to the Rockstar Energy Husqvarna that cannot be purchased is an additional lower frame support spar, just below the front of the engine where the header pipe exits the cylinder head. This adds some rigidity to the front of the chassis for improved handling and greater precision. Tucked away behind the front numberplate is a Showa steering dampener that was used on production Honda CRF motorcycles in the past. Anderson prefers to run it thanks to the settling effect it can have on the bike’s front end in corners.

The Brembo brakes that are found on Anderson’s machine are absolute works of art, and they are definitely of the works variety. Anderson does not, however, prefer an oversized front rotor as the strength of the brakes are more than sufficient for his preferences. The wheels on the champ’s bike consist of Talon Ultralight hubs and Excel A60 rims; both are provided by Dubya USA but they are built in house at the race shop.

Interestingly enough, Akrapovic provides all of the carbon fiber protective parts, even though the team now relies on FMF Racing to provide custom-built exhaust systems. Best known as an exhaust system manufacturer, the Slovenian brand also produces some of the most beautiful carbon fiber parts we’ve seen. The FMF factory 4.1 exhaust system is completely custom build and fine-tuned to suit the power output of the Factory Services engine, and Anderson’s preferences.

It’s a shame that Anderson was knocked out of contention early in the season in a practice crash that left him with a badly broken arm, several broken ribs, a partially collapsed lung, and minor damage to his liver, but El Hombre is expected to make a full recovery in time for this summer’s MX Nationals. We can’t wait to see this bike in action again, albeit with some softer suspension settings! 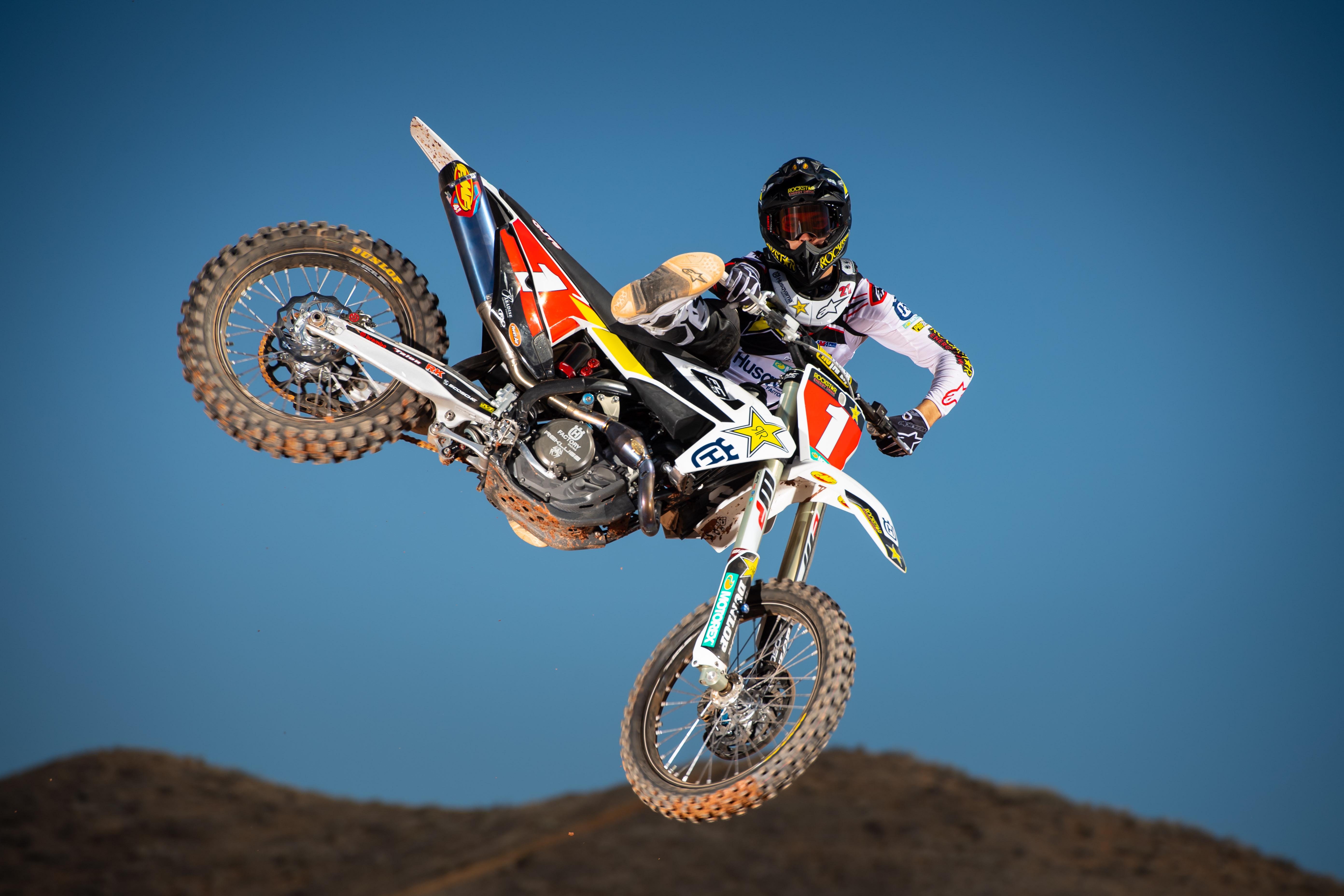